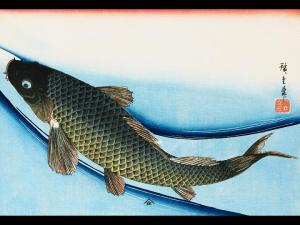 Consider my dog: Through habit and with repeatedly renewed rewards, the dog ‘knows’ (whatever that means for a dog) that when I open the refrigerator door, there’s a good chance food will come out of it, and so she wags her tail in expectation of some flotsam or jetsam that might come her way when it does.When I just check the refrigerator before shopping. and nothing food-like comes out, the tail gradually drops, along with her ears, and she lowers her head. I take these to be signs of disappointment. If so, they indicate that she considers the rate of incidental relationship between opening-refrigerator-door and food-taken-out-and-distributed to be very high. I think she over-estimates, since I take cold drinks out of my refrigerator more often than I take out food. But she does appear to recognize the sound of a can or bottle being opened, so I could be wrong.

My dog senses food, moves towards it, and, for all I know, never bothers to ask if she’s hungry. Yet she feeds until she needs no more, so apparently there is some measure to her eating, some ratio between hunger and satisfaction.

Food may not be god to my dog, but eating may be the holiest canine sacrament.

William James posited that when we humans notice a danger, we first move away from it and only secondarily feel fear. Our baseline responses to the world are fundamentally the same as those of other animals. Even our much vaunted powers of reasoning may be really an extension of what is most animal about us.

We can suppose that, in our over-complicated brains, our responses to experience include intellection; we should even allow that such intellection could be supplanted by, or coordinated with, imagination, such that conceptualization would emerge.  (Concepts are generalizations, and how can we generalize without imagination?)  And conceptualization necessitates language – There is no ‘all,’ some,’ or ‘none’ without these words to signify them.  We speak because it is the kind of animal we are.

As we all should know, the classical definition of the human species is ‘rational animal.’   I personally see nothing wrong with this; Aristotle liked the idea, and so did the great Indian philosopher Nagarjuna. The voices protesting against this definition, or offering touchy-feely alternatives, about our existence as spirits or embodiments of love, would leave us in a cloud of unknowing as to our own natures. Mysticism is often merely a kind of self-generated psychedelic trip.  (Oh, those wonderful endorphins!)

However, the term ‘rational animal’ has two words in it. To assume that, since rationality is what makes us special among all other animals, we must therefore concentrate our understanding of ourselves on reason itself, in order to know ourselves fully, is to make a similar error to redefining us as walking spirits or embodiments of love.  We are not programmed, we are not programming; neither is the dog.

Let us pay heed to one of the most impressive rational animals the West has produced, and a sometime mystic as well, Thomas Aquinas. No one could believe more fiercely in the spirituality of the human species; and, as G. K. Chesterton points out in his biography of Thomas, The Dumb Ox, no one could love more passionately as Aquinas loved his god. And was there ever another thinker who could construct a grander, more complicated, more subtle an artifice of reason than Thomas’ Summa Theologica? Yet his calls for a celebration of the body, as presumed gift from god – not our prison, but our enjoyment – are well known. So let us take anti-animal rationality into the court of Aquinas:

“(A)nimal is predicated of man essentially and not accidentally, and man is not part of the definition of animal, but the other way about. Therefore of necessity by the same form a thing is animal and man; otherwise man would not really be the thing which is an animal, so that animal can be predicated of man.” *

To think the human is to think the animal, first and primarily as a material entity. The notion, that we should understand human nature in its rationality as apart from its animality, is irrational. For Aquinas, human rationality derives from an infusing force which, following his tradition, he calls “soul.” But he also says, with Aristotle, that even metal has some ‘soul,’ so he cannot mean by this what we have come ‘spirit.’ Instead, it is a term for a principle of the rational ordering of the universe (which rationality, for Aquinas, would arise from the mind of the divine). Humans among all animals partake of a power of rationality that conceives, that articulates itself linguistically – an intellective soul; but nothing may exist that insults rationality as order. Nihil est sine ratione.

“The path led through the tradition according to which ratio in the double sense of reckoning speaks in the words ‘ground’ and ‘Reason.’ But logos, when thought in the Greek way, speaks in ratio. Only when we contemplated what logos meant fro Heraclitus in early Greek thinking did it become clear that this word simultaneously names being and ground/reason, naming both in terms of their belonging together.  (…)  Nothing is without ground/reason. Being and ground/reason: the same. Being, as what grounds, has no ground; as the abyss it plays the play that, as history, passes being and ground/reason to us.” **

I have elsewhere rejected the ‘panpsychism’ implicit in Aquinas’ thought, and I don’t believe in god; but while denying that there is any ‘design’ to the universe, I also accept that our lives follow discernible rational pathways, however seemingly inarticulate, because there just is an ordering of the universe, and an ordering of our responses that are quite part and parcel with our animal being.

My point here is simple: The study of rationality as systematization of thought – logic, mathematics, etc. – can certainly be separated from the study of human being. The study of human being, however, cannot be separated out from the study of animal being. It is rationality itself that demands this of us. Order, measure, response – rationality was once a term for understanding the structure of being.  And if we have a hard time seeing this, we may need to redefine rationality itself so that we can; for it seems that the term was used somewhat differently, long ago, than how we use it today. And I for one will not say we use it any better.

A modern symposium for the digital age

heideggerpolitics
A Blog of Bosh

My thoughts, they're simple. But not simple enough to say out loud. Read them. Read all of my thoughts.

This is not a travel blog

Just exploring what it is to be human.

Inferentialism About Absolutely Everything

Questions from the not so smart one...

Blowing the dust off heritage journalism

The Physician Wellness Movement and Illegitimate Authority: The Need for Revolt and Reconstruction

A fiction blog of funny and dark stories

Meditations on Art and Life